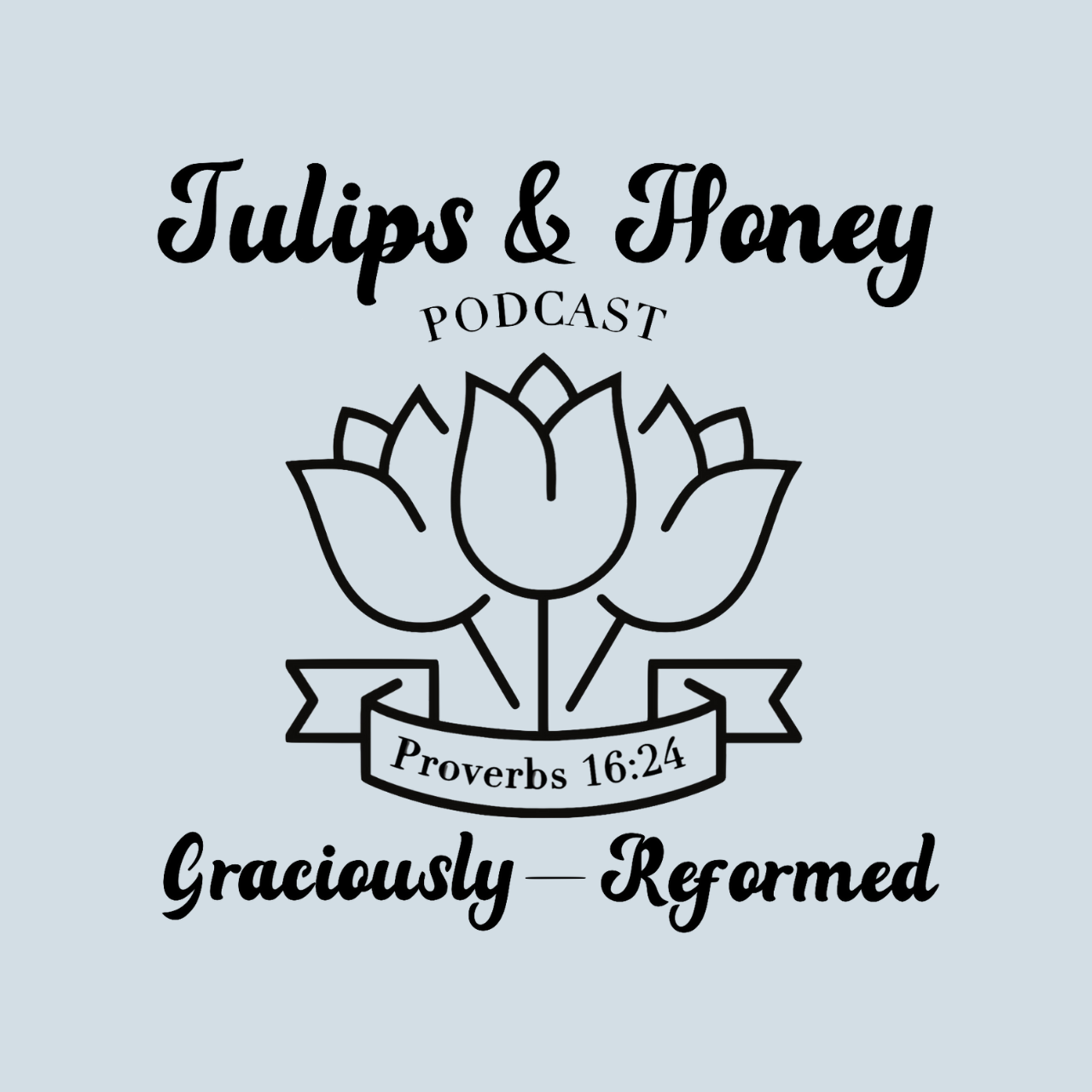 Well, Lauren and Becca certainly hope to be bringing you a Valentines Day episode unlike any others you’re likely to hear this year. Historical facts, historical maybes, personal stories, evangalism, and a large amount of shenanigans will hopefully put you all in the Valentines Day spirit before February even starts. Below is another one of Becca’s famous outlines, timestamped by Lauren, and containing all the links you might need to thoroughly enjoy today’s episode. We pray that this episode is a blessing to you all, and are so very thankful for our Humblebee’s. If you want an extra laugh, check the gals out on YouTube where there’s a few surprising additions to the episode. If you would like to support Tulips and Honey you can find their Patreon page here: https://www.patreon.com/Tulipshoneyhub

a. Origins to a Bloody Pagan Festival: Some trace Valentine’s Day origins to a Christian effort to replace a pagan fertility festival that has been dated as far back as the 6th century B.C. During the festival of Lupercalia, Roman priests would sacrifice goats and dogs and use their blood-soaked hides to slap women on the streets, as a fertility blessing. According to legend, women would later put their names in an urn and be selected to be paired with a man for a year. – TimeStamp: 00:19:55

b. Every year, thousands of romantics send letters addressed to Verona, Italy to “Juliet,” the subject of the timeless romantic tragedy, “Romeo and Juliet.” The city marks the location of the Shakespearean tale, and the letters that reach the city are dutifully answered by a team of volunteers from the Juliet Club. Each year, on Valentine’s Day, the club awards the “Cara Giulietta” (“Dear Juliet”) prize to the author of the most touching love letter. – TimeStamp: 00:22:52

c. Box of Chocolates: The Valentine’s Day tradition of giving a box of candy was started in the 19th century by Richard Cadbury, a scion of a British chocolate manufacturing family. With a new technique recently established at the company to create more varieties of chocolate, Cadbury pounced on the opportunity to sell the chocolates as part of the beloved holiday. – TimeStamp: 00:23:50

d. First Valentine Was Written From a Prison: History’s first valentine was written in perhaps one of the most unromantic places conceivable: a prison. Charles, Duke of Orleans wrote the love letter to his second wife at the age of 21 while captured at the Battle of Agincourt. As a prisoner for more than 20 years, he would never see his valentine’s reaction to the poem he penned to her in the early 15th century. – TimeStamp: 00:24:20

e. ‘Wearing Your Heart on Your Sleeve’: The term “wearing your heart on your sleeve” may have origins in picking a valentine. Smithsonian reports that during the Middle Ages, men would draw the names of women who they would be coupled with for the upcoming year while attending a Roman festival honoring Juno. After choosing, the men wore the names on their sleeves to show their bond during the festivities. – TimeStamp: 00:25:45

f. ‘Sweethearts’ Candies Started Out as Lozenges The iconic chalky heart-shaped candies that have been passed out lovingly every Valentine’s Day started out as lozenges. According to the Food Business News, pharmacist and inventor Oliver Chase created a machine that would quickly create the lozenges before switching to using the machine to create candy—later known as Necco Wafers. Chase’s brother came up with the idea to print messages on the candy in 1866, and the candies got their heart shape in 1901, appealing specifically to Valentine’s Day sweethearts. In 2019, the Sweetheart brand of conversation hearts was suspended for a year as the candy’s new owner, Spangler Candy Co., needed time to make a supply of the hearts for Valentine’s. – TimeStamp: 00:26:53

g. Cupid Began as a Greek God: The chubby baby with wings and a bow and arrow that we call Cupid has been associated with Valentine’s Day for centuries. However, before he was renamed Cupid, he was known to the ancient Greeks as Eros, the god of love. Eros, the son of Greek goddess Aphrodite, would use two sets of arrows—one for love and another for hate—to play with the emotions of his targets. It wasn’t until stories of his mischief were told by Romans that he adopted the childlike appearance that we recognize today.

h. How ‘X’ Came to Mean ‘Kiss’: The idea of using a kiss to sign off on valentines also has a long history, according to the Washington Post. The use of “X” came to represent Christianity, or the cross, in the Middle Ages. During the same time, the symbol was used to sign off on documents. After marking with an X, the writer would often kiss the mark as a sign of their oath. As the gesture grew among kings and commoners to certify books, letters and paperwork, these records were described as having been “sealed with a kiss.” – TimeStamp: 00:30:17

i. And after you have suffered a little while, the God of all grace, who has called you to his eternal glory in Christ, will himself restore, confirm, strengthen, and establish you.

c. The opportunity of single life to serve God.

b. Most of the talk about love these days ignores this principle. “Love” has been redefined as a broad tolerance that overlooks sin and embraces good and evil alike. That’s not love; it’s apathy. God’s love is not at all like that. Remember, the supreme manifestation of God’s love is the Cross, where Christ “loved us and gave himself up for us, a fragrant offering and sacrifice to God” (v. 2). Thus Scripture explains the love of God in terms of sacrifice, atonement for sin, and propitiation: “In this is love, not that we have loved God but that he loved us and sent his Son to be the propitiation for our sins” (1 John 4:10). In other words Christ made Himself a sacrifice to turn away the wrath of an offended deity. Far from dismissing our sins with a benign tolerance, God gave His Son as an offering for sin, to satisfy His own wrath and justice in the salvation of sinners.

That is the very heart of the Gospel. God manifests His love in a way that upheld His holiness, justice, and righteousness without compromise. True love “does not rejoice at wrongdoing, but rejoices with the truth” (1 Cor. 13:6). That’s the kind of love we are called to walk in. It’s a love that is first pure, then peaceable. 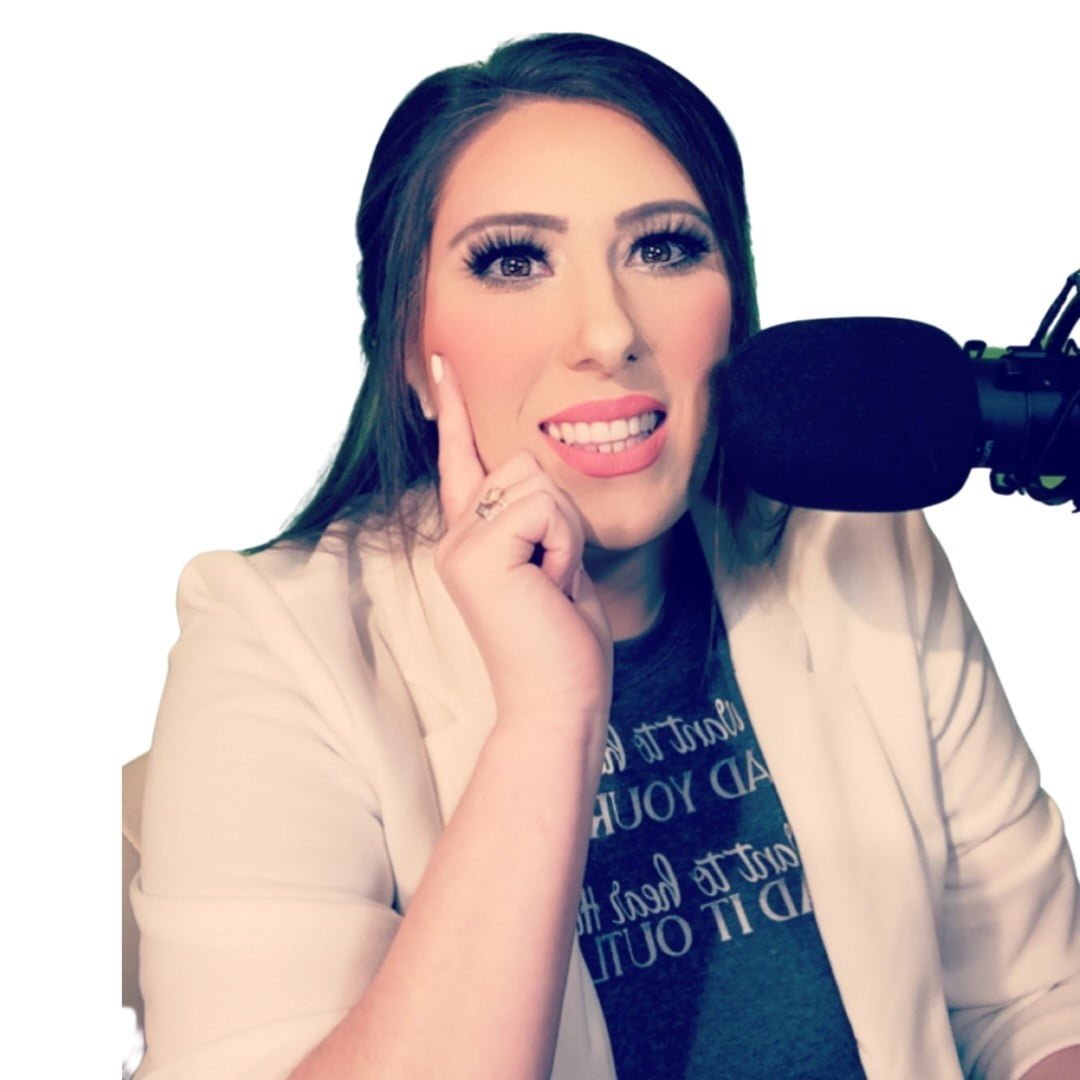 Lauren Hereford is a stay-at-home wife and homeschooling mom who was graciously saved by God on July 4th, 2015. Two years later she began blogging and podcasting, hoping to edify others new to the faith. She is the host of Tulips and Honey hosted here at Servants of Grace, and a regular contributor to our ministry, as well as The Aftershow on AGTV, and the Technical Director of Open Hearts in a Closed World. 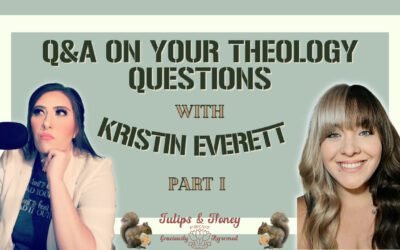 Q&A on Your Theology Questions With Kristin Everett Part 1

On today’s episode of Tulips and Honey Lauren and Kristin sit down and take your theology questions on false verses biblical churches, the difference between the word of faith and the prosperity gospel, and empathy, compassion, social media, and the end times. What... 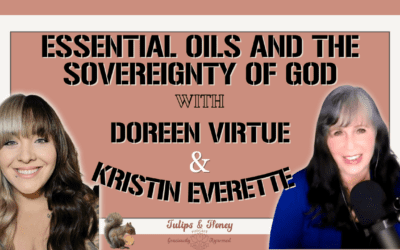 On today’s episode of Tulips and Honey, Lauren is joined by Kristin Everett and Doreen Virtue. Together they discuss the danger and claims of essential oils, how to evangelize someone caught in deception, Christian liberty and legalism, and the nature of Christian... 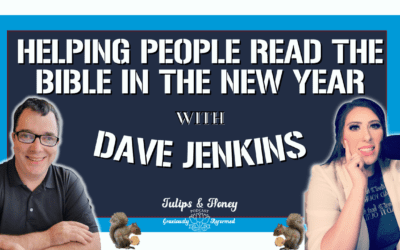 Helping People Read the Bible in the New Year

On today’s episode of Tulips and Honey, Lauren and Dave discuss the means of grace and the spiritual disciplines, advice for reading your Bible with the Church, the difference between reading and studying the Bible, and the importance of being able to access all of... 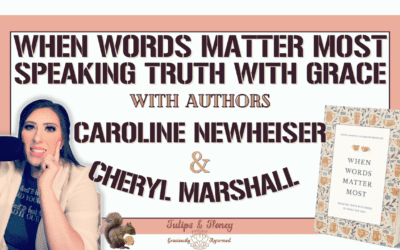 Cheryl Marshall and Caroline Newheiser- When Words Matter Most: Speaking Truth with Grace

On today’s episode of Tulips and Honey, Lauren interviews Cheryl Marshall and Caroline Newheiser on equipping women to speak the truth in love, what graciousness looks like with one another, genuinely listening and understanding one another, along with their book,... 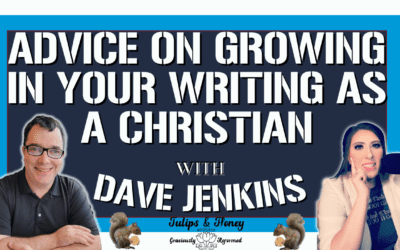 Advice on Growing in Your Writing

On today’s episode of Tulips and Honey Lauren and Dave discuss advice on discovering your writing voice, growing as a writer, selecting topics to write on, avoiding the use of generalizations in writing, what to do before you publish a book, and focusing on...