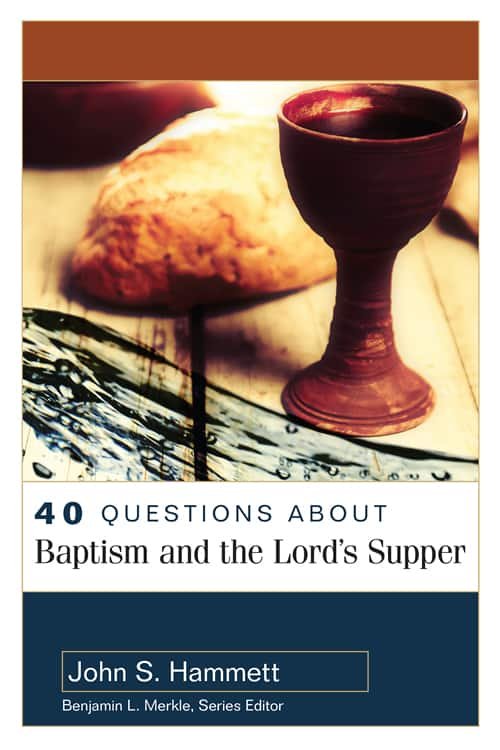 40 Questions About Baptism and the Lord’s Supper 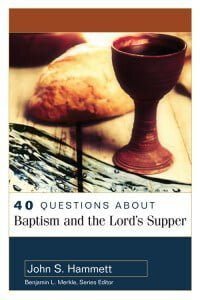 Most who profess the name of Christ, whether they be Catholic, Protestant, and all the variations that exist under both umbrellas, participate and practice at least some version of Baptism and the Lord’s Supper. With that said, there are a variety of competing beliefs and methodologies for both sacraments with a long history of denominational and church teaching to support those systems. Which approach is correct and what does the Bible have to say about baptism and the Lord’s Supper as after all, over and above any church tradition stands the foundation of Scripture. John Hammett, in his helpful book 40 Questions about Baptism and the Lord’s Supper attempts to tackle some of the major talking points and perspectives about both of these issues.

As Hammett notes in the introduction, “No practices are more characteristic of Christianity than baptism and the Lord’s Supper.” Regardless of the specific method by which a certain church does either activity, most when questioned would likely associate baptism and the Lord’s Supper as important practices, even though many might not fully grasp the biblical why and how of either.

Since both are noted as things which the body of Christ are commanded to be about doing, it is thus important to properly understand the why and furthermore the how. Hammett rightly notes that Jesus commanded us to go forth and preach the gospel, baptizing those who come to faith in Christ. Jesus also noted that the partaking of the bread and juice was to be done in remembrance of him thus implying that the Lord’s Supper as it has become to be known was to be a continued practice after his death, burial, and resurrection.

There are a number of highlights in this book that are worthy of note, but I will focus on just a couple of questions answered by Hammett that I feel are of special interest. The first sub-section if you will that is important to read in this book is Hammett’s discussion of the various denominational stances on baptism and the Lord’s Supper respectively. He does a good job of outlining the Catholic, Lutheran, Reformed, Baptist, and any other viewpoints of note. This was most interesting reading as Hammett engages how each tradition developed their doctrine, any historical changes of note, and how these traditions practice baptism and the Lord’s Supper. Since Hammett is a Baptist, it is no surprise that he leans quite heavily towards the Baptist methodology and for that matter, when it comes to both of these subjects, I too connect somewhere in between the Reformed and Baptist traditions or a combination of the two. With that said, this was valuable reading and valuable information.

Another interesting topic of discussion was the issue of infant baptism, sometimes known as paedobaptism. Some of the Presbyterian persuasion have written of late on the viability of this practice, associating it with matters of covenant and the notation in the New Testament, at least in their perspective, of the baptism of households including the practice of also baptizing infants. Hammett covers that particular system while also noting some criticisms of such a practice by engaging the relevant scriptural passages used both in support and opposition to the practice of paedobaptism. I found the discussion to be honest and the criticisms while forthright were irenic in tone.

Also of value are the reflection questions provided at the conclusion of each chapter. Each of the questions are engaging and will greatly assist the reader in digging even deeper into the subject matter.

Overall I found this book to be a very insightful book and recommend it. As noted earlier, Hammett definitely approaches the subject matter from his Baptist background; however, it by no means interferes with or negates the information provided or the overall thrust and intent of the book as a whole. This book is a resource I am sure many will find useful as they study the important subjects of baptism and the Lord’s Supper.

I received this book for free from Kregel Academic for this review. I was not required to write a positive review. The opinions I have expressed are my own. I am disclosing this in accordance with the Federal Trade Commission’s 16 CFR, Part 255 : “Guides Concerning the Use of Endorsements and Testimonials in Advertising.”