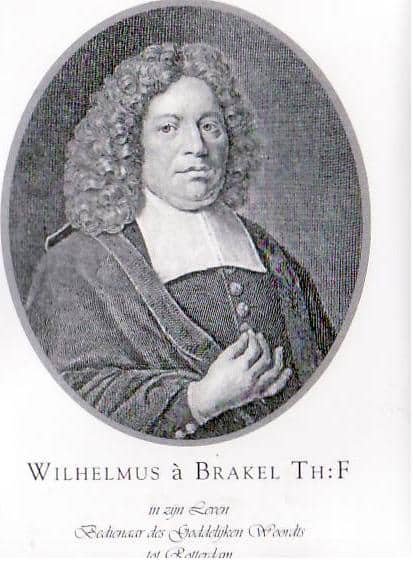 Wilhelmus a Brakel – The Efficacy and Benefit of Christ’s Resurrection

The first fruit is justification. “But for us also, to whom it shall be imputed, if we believe on Him that raised up Jesus our Lord from the dead, who was delivered for our offences, and was raised again for our justification” (Rom. 4:24–25). As long as the Surety still suffered and death had power over Him, the final penny had not as yet been paid. His conquering of the last enemy, death, and His triumphant appearance as being alive, were evidences that sin had been fully atoned for, the ransom had been paid, God’s justice had been satisfied (being satisfied with this atonement), and that thus the Surety was justified (1 Tim. 3:16). Consequently all God’s children have been reconciled in Him. There is not one sin, not even the least part thereof, for which satisfaction has not been made, and therefore they are free from all guilt and punishment. If someone senses the dreadfulness of guilt and punishment, views God as being provoked by sin so that there is no peace but only terror within the conscience (to such justification is most desirable), let him then turn about and by faith behold this Surety as having risen from the dead, which is the evidence of perfect satisfaction. Receive Him by faith who calls you and offers His fullness without price. Let such a person go to God and ask the Lord, while pleading upon the resurrection of Christ from the dead (1 Pet. 3:21), “Are not my sins punished? Has not my guilt been atoned for? Has not my Surety risen from the dead and thus entered into rest? Art not Thou my reconciled God and Father? Am I not at peace with Thee?” May such a person thus wrestle to apply all this to himself on the basis of the promises made to all who receive Christ by faith, until he experiences the power of Christ’s resurrection unto his justification and being at peace with God.

The second fruit is sanctification. The apostle demonstrates this in Romans 6:4–5, “Therefore we are buried with Him by baptism into death: that like as Christ was raised up from the dead by the glory of the Father, even so we also should walk in newness of life, for if we have been planted together in the likeness of His death, we shall be also in the likeness of His resurrection” (Rom. 6:5). The apostle emphasizes this also when he states, “And you, being dead in your sins and the uncircumcision of your flesh, hath He quickened together with Him, having forgiven you all trespasses” (Col. 2:13); “If ye then be risen with Christ, seek those things which are above” (Col. 3:1). Even if believers may know themselves to be justified, they cannot find satisfaction in this. Their whole desire and life is to discern the image of God within themselves, to be conformed to that image, to thus be united to Him and to live in Him—that is their salvation. They cannot but find delight in knowing God, in loving Him, in fearing Him, in being subject to Him, and thus in thoughts, words, and deeds be in a spiritual frame which is fully and entirely in agreement with His will. Sin is therefore despicable to them: they abhor themselves: they are ashamed before God and inwardly sorrow over their deeds. How it would be their delight to be delivered from the sins which so grieve them! How this causes them to long for heaven, knowing that they will there behold God’s face in righteousness, being satisfied with His likeness when they awake (Ps. 17:15)! Oh, yield to this heartfelt desire and let it motivate you to be engaged in the way of holiness, for it is the Lord’s way to cause His children, while thus engaged in battle, to increase and proceed with joy in sanctification.

(1) View Christ’s resurrection as an example and a pattern. Christ arose in the morning. Accustom yourself to meditate upon Christ’s resurrection as you awake. Let every occurrence of waking up and arising out of bed stir you up to arise with Christ. Christ arose on the first day of the week . Therefore commemorate the resurrection of Christ on each Sabbath day and, uniting yourself with Him in the resurrection, let it be a renewed revival of your spiritual life. Christ departed from the grave , the place of the dead. You likewise must avoid (as much as your profession will suffer you to do so) familiar interaction with worldly and ungodly men. They are dead, they stink, and their stench is contagious. Christ left His burial garment behind in the grave. You likewise ought to hate the garment which has been polluted by the flesh. Leave all that is sinful behind in Sodom and Egypt, that is, in the grave, and depart from honor, goods, entertainment, and whatever belongs to the world. Christ appeared alive . Let your light therefore also shine and let everyone perceive that there is much distance between you and sinners. Show by your actions that you denounce whatever the world cleaves to. Manifest your love, humility, and heavenly–minded 54 life in the love and fear of God. Let the image of God and the likeness of Christ within you be manifested, doing all this not to be perceived by others as such, but to the glory of Christ, the conviction of the world, and the encouragement of the godly. The purpose of Christ’s association with men was only to convince His own of the veracity of His resurrection and to strengthen them. He also did so to the benefit of His church unto the end of the world, even though this lasted but forty days, after which He ascended into heaven. Let it likewise be the objective of your life to walk godly upon the earth in order that those who are acquainted with you may be convinced and encouraged. Let it also be a preparation for going to heaven itself.