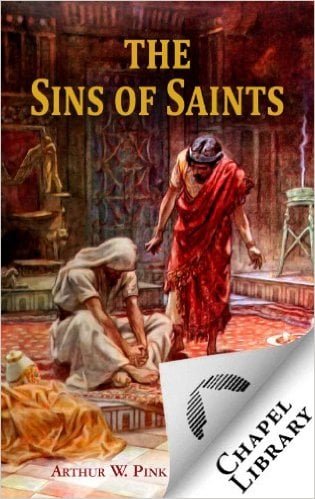 In every believer there remains the liability to sin. The new birth is not, as so many suppose, a change of heart, nor the removal of the carnal nature, but is the reception of an entirely new nature. The new birth is neither the elimination nor the transformation of the old nature, but is the communication and impartation of a new nature, a spiritual nature, the Divine nature. In every born again person there are two natures—the old and the new—the flesh and the spirit — which the Apostle Paul tells us are contrary in disposition, continually warring against each other. As then the old, carnal nature, remains in the believer as long as he continues in this body, there is always a possibility of him sinning.

While this is true, yet the believer is responsible not to sin. The death of Christ annulled it. The Cross has freed us from the dominion of sin. Once we were its slaves, but now it has no right to control us. The Word of God forbids it: “Awake to righteousness and sin not” (1 Cor. 15:34). “As he which hath called you is holy, so be ye holy in all manner of conversation” (1 Pet. 1:15). The indwelling Holy Spirit condemns it. Our bodies are His temples, and it is our bounden duty to exclude everything which would in anywise defile them. The grace of God repudiates it. The promise of our Lord is, “My grace is sufficient for thee.” The resources of Deity are held at our disposal. All power is ours if we will appropriate it. No believer is obliged to sin, and there is no legitimate excuse for the indulgence of it. But the fact remains that all believers do sin. “For there is not a just man on earth that doeth good, and sinneth not” (Eccl. 7:20). Every believer sins every day of his life, sins both negatively and positively. By this we do not mean that he violates the laws of the State, or that he deliberately breaks one of the Ten Commandments. We mean, that all come short of the standard of holiness revealed in God’s Word. The thought of foolishness is sin (Prov. 24:9). Anxiety and worry are sinful, because forbidden by the Scripture. Covetousness is sinful, pride is sinful, sloth is sinful, yet who can plead guiltless? “If we say that we have no sin, we deceive ourselves, and the truth is not in us” (1 John 1:8).

While it is true that every believer sins, sins daily, insomuch that he fails to measure up to the standard of holiness revealed in God’s Word and fails to perfectly follow the “example” left us by the Lord Jesus Christ, yet, we would insist upon the fact that there is a fundamental difference in this respect between the believer and the unbeliever. The unbeliever is “the servant (slave) of sin” (John 8:34), but the believer r has been “made free” — delivered from the power of sin (John 8:36). Furthermore; we read, “Whosoever abideth in him sinneth not: whosoever sinneth hath not seen him, neither known him. Little children, let no man deceive you: he that doeth righteousness is righteous, even as he is righteous. He that committeth sin is of the devil” (1 John 3:6-8). Now these verses do not teach that the daily walk of a believer is sinless, but they do teach that such an one will not practice sin. The tense of the verb in these verses must be carefully noted. It is the perfect which is here employed: “he that committeth sin” — commits and continues committing is the force of the word: he that makes a regular practice of committing sin. Observe it does not say, “He that sins is of the devil,” but he that sins and goes on sinning. In the same way “he that doeth [practices] righteousness is righteous.” The apostle is referring to the general course and tenor of our lives. He is speaking of that which is our habit. Let the Christian’s life be summed up as a whole and though like David he may wander from the path of rectitude, yet shall he return thereto; though like Peter he may fail in the hour of testing, yet shall he repent of his failure; though like Paul he may sin with his lips (Act 23:3-5), yet shall he confess his wrong-doing; and it will be seen that his complete record can be characterized and summarized only as one that “doeth righteousness.”