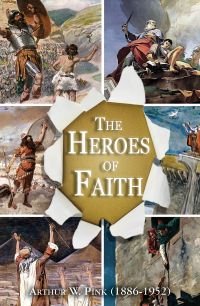 Ere we take up the contents of the 11th chapter of Hebrews, let us very briefly review the Epistle itself. Chapters 1 and 2 are more or less introductory in their character. In them the wsondrous Person of the God-man Mediator is presented to our view, as superior to the Old Testament prophets and as excelling the angels. The first main division of the Epistle commences at 3:1 and runs to the end of 4:15, and treats of the mission of Christ: this is seen to surpass that of either Moses or Joshua, for neither of them led the people into the real rest of God – the section is followed by a practical application in 4:16. The second principal division begins with 5:1 and extends to 10:18, and deals with the priesthood of Christ: this is shown to transcend the Aaronic in dignity, efficacy and permanency; the section is followed by a practical application, contained in 10:19 to 12:29. The closing chapter forms a conclusion to the Epistle.

“The general nature of this Epistle, as unto the kind of writing, is paranetical or hortatory, which is taken from its end and design. The exhortation proposed is to constancy and perseverance in the faith of the Lord Jesus Christ, and in the profession of the Gospel, against temptations and persecutions. Both these the Hebrews had to conflict with in their profession-the one from the Judaical church-state itself, the other from the members of it. Their temptations to draw back and forsake their profession arose from the consideration of the Judaical church-state and Mosaic ordinances of worship, which they were called by the Gospel to relinquish. The Divine institution of that state, with its worship, the solemnity of the covenant whereon it was established, the glory of its priesthood, sacrifices and other Divine ordinances (Rom. 9:4), with their efficacy for acceptance with God, were continually proposed unto them, and pressed on them, to allure and draw them off from the Gospel. And the trial was very great, after the inconsistency of the two states was made manifest. For therein declaring the nature, use, end, and signification of all Divine institutions under the Old Testament; and allowing unto them all the glory and efficacy which they could pretend unto, the writer of this Epistle declares from the Scripture itself that the state of the Gospel church, in its high-priest, sacrifice, covenant, worship, privileges and efficacy, is incomparably to be preferred above that of the Old Testament; yea, that all the excellency and glory of that state, and all that belonged unto it, consisted only in the representation that was made thereby, of the greater glory of Christ and the Gospel, without which they were of no use, and therefore ruinous or pernicious to be persisted in.