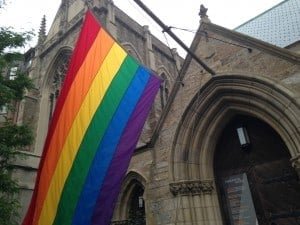 The biggest issue confronting evangelicalism today is not over homosexuality and marriage, but whether or not these are “agree-to-disagree” issues.

Can progressive evangelicals who advocate same-sex marriage share a measure of unity with the rest of the global church?
Is it possible to see one’s view of sexual ethics as a dividing line between evangelical churches (similar to debates over baptism, speaking in tongues, etc.), but not something that necessitates a divorce within evangelicalism as a whole?

Can believers simply “agree to disagree” on this contentious issue and allow various views to exist within what is commonly accepted as “orthodoxy?”

David Gushee, an ethicist who now supports same-sex marriage and same-sex relationships, recently wrote an article explaining why conservative and progressive evangelicals are headed for a divorce. According to Gushee, the nature of marriage and sexuality is merely the tip of the iceberg because there are “a hundred other fractures” – questions related to biblical authority and political involvement.

Gushee sees these debates as a replay of the fundamentalist-modernist controversy from a hundred years ago, and he concludes:

“Conservative and progressive evangelicals need to let each other go their separate ways, acknowledging that despite shared faith in Christ we have become two separate religious communities.”

Paul Louis Metzger, founder and director of The Institute for the Theology of Culture, pushes back against Gushee’s recommendation, appealing to Christ’s concern for unity. “How can we go our separate ways unless we no longer belong to the same Christ?” he asks.

Quoting Wolfhart Pannenberg, Metzger worries that disunity in the body of Christ is the leading cause of “a world free from all religious ties.” Instead, we should fight to remain together in order to avoid presenting a “dismembered” Christ to the world.