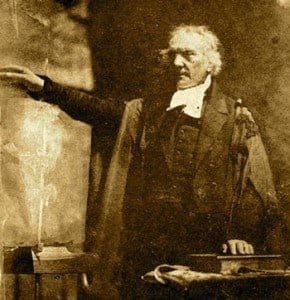 Thomas Chalmers – The Expulsive Power of a New Affection

“Love not the world, neither the things that are in the world. If any man love the world, the love of the Father is not in him.” 1 John 2:15

My purpose is to show, that from the constitution of our nature, the former method is altogether incompetent and ineffectual and that the latter method will alone suffice for the rescue and recovery of the heart from the wrong affection that domineers over it. After having accomplished this purpose, I shall attempt a few practical observations.

Love may be regarded in two different conditions.
The first is, when its object is at a distance, and then it becomes love in a state of desire.
The second is, when its object is in possession, and then it becomes love in a state of indulgence. Under the impulse of desire, man feels himself urged onward in some path or pursuit of activity for its gratification. The faculties of his mind are put into busy exercise. In the steady direction of one great and engrossing interest, his attention is recalled from the many reveries into which it might otherwise have wandered; and the powers of his body are forced away from an indolence in which it else might have languished; and that time is crowded with occupation, which but for some object of keen and devoted ambition, might have drivelled along in successive hours of weariness and distaste – and though hope does not always enliven, and success does not always crown this career of exertion, yet in the midst of this very variety, and with the alternations of occasional disappointment, is the machinery of the whole man kept in a sort of congenial play, and upholden in that tone and temper which are most agreeable to it.

Insomuch, that if, through the extirpation of that desire which forms the originating principle of all this movement, the machinery were to stop, and to receive no impulse from another desire substituted in its place, the man would be left with all his propensities to action in a state of most painful and unnatural abandonment. A sensitive being suffers, and is in violence, if, after having thoroughly rested from his fatigue, or been relieved from his pain, he continue in possession of powers without any excitement to these powers; if he possess a capacity of desire without having an object of desire; or if he have a spare energy upon his person, without a counterpart, and without a stimulus to call it into operation.

The misery of such a condition is often realized by him who is retired from business, or who is retired from law, or who is even retired from the occupations of the chase, and of the gaming table. Such is the demand of our nature for an object in pursuit, that no accumulation of previous success can extinguish it – and thus it is, that the most prosperous merchant, and the most victorious general, and the most fortunate gamester, when the labour of their respective vocations has come to a close, are often found to languish in the midst of all their acquisitions, as if out of their kindred and rejoicing element. It is quite in vain with such a constitutional appetite for employment in man, to attempt cutting away from him the spring or the principle of one employment, without providing him with another. Thu whole heart and habit will rise in resistance against such an undertaking. The else unoccupied female who spends the hours of every evening at some play of hazard, knows as well as you, that the pecuniary gain, or the honourable triumph of a successful contest, are altogether paltry. It is not such a demonstration of vanity as this that will force her away from her dear and delightful occupatiou. The habit cannot so be displaced, as to leave nothing but a negative and cheerless vacancy behind it – though it may so be supplanted as to be followed up by another habit of employment, to which the power of some new affection has constrained her. It is willingly suspended, for example, on any single evening, should the time that wont to be allotted to gaining, require to be spent on the preparations of an approaching assembly. The ascendant power of a second affection will do, what no exposition however forcible, of the folly and worthlessness of the first, ever could effectuate.