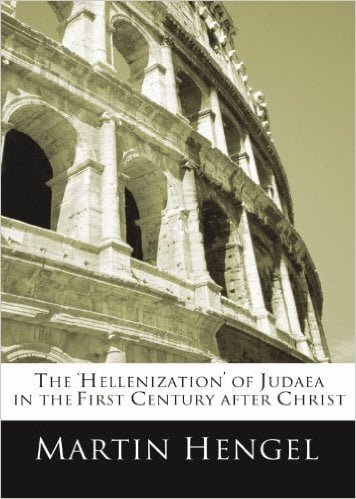 The Hellenization of Judea in the First Century After Christ

Many have arguably heard of and have some familiarity with the term “Hellenization.” With that said, how is such a description accurately applied and how great an influence was Greek philosophy and life in general on Jewish people during the period immediately following Christ? For that matter, what does it matter when it comes to our approach to and understanding of the New Testament? Martin Hengel, in The Hellenization of Judea in the First Century After Christ, his sequel to the monumental study of Judaism and Hellenism, explores issues of the Greek language, culture, education, politics, and their overall influence on the Jewish people during this period.

This has been a subject that has fascinated me of late. The influence of Greek culture preceding and following the period in which Jesus lived cannot be negated or underestimated. Authors such as Werner Jaeger have noted the impact of Greek Paideia and Platonic philosophy, in particular, can be identified as transitioning into even the teachings of the religious leaders of the day, albeit a bit more pronounced in the period covered by Hengel. In fact, Greek ideas continue to influence our culture today and to a degree even some theological traditions.

What does this all mean? It is imperative to realize what Hellenization was all about and what it meant during this period. Greek was the common language spoken, as noted by Hengel, “Herod went over to purely Greek inscriptions on Jewish coins and weights”, and the aforementioned Greek Paideia were factors in the daily life of the people.

Of particular interest, at least, to me, is the Platonic influence on matters related to the doctrine of man. Hengel quotes Adolph Van Harnack’s book What is Christianity, specifically a quote averring “The picture of Jesus’ life and his discourses stand in no relation with the Greek spirit.” Hengel seems to assert that Jesus and by extension his disciples were influenced by Greek philosophy, and thus this approach to life seeped into their message. Given the vast difference between the Hebraic (biblical) view of man and the Platonic view of man, in particular regarding the definition and application of terms such soul and spirit, I am not quite sure Jesus or His disciples taught anything remotely related to Plato’s philosophical treatises. Perhaps that has been our understanding over time due to our own approach to such matters and failure to recognize the difference between biblical and Platonic thought. During this period, the Jewish religious leaders had begun to embrace certain elements of Platonic thought. Jewish authors such as Neil Gillman have correctly brought that to light.

Hengel does rightly note that despite the pervasive issue of Hellenization during this period, even in Judaism and the early ekklesia (church), certain elements of belief were not discarded such as a continued affirmation of the first two commandments and the absolute rejection of desecration of the Temple. It seems that while Hellenism had made its mark, there were some points of culture and society that for a time were not breached. Hengel makes the case that subsumed within Hellenism, and its overall sway was the message of the gospel, one that was not necessarily rooted in Greek teaching methods but rather in “personal testimony in word and action, encounters which led to participation in the synagogue services or meetings of the Christian community.”

I highly recommend this book. I also recommend Hengel’s larger treatise on this subject, a book I hope to be engaging myself soon.

I received this book for free from WIPF and Stock for this review. I was not required to write a positive review. The opinions I have expressed are my own. I am disclosing this in accordance with the Federal Trade Commission’s 16 CFR, Part 255 : “Guides Concerning the Use of Endorsements and Testimonials in Advertising.”