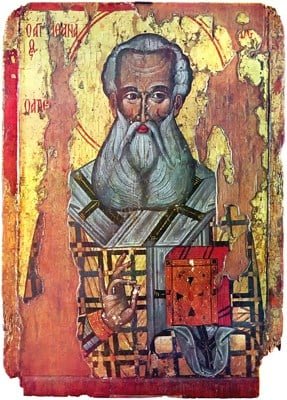 Ryan Reeves – Who Was Athanasius and Why Was He Important?

Athanasius is the theologian people have always loved, though in recent years it has become fashionable to grudge him. Some of this anger is theologically motivated (he felt heresy in priests was grounds for excommunication) and some is culturally motivated (we sniff at his angry style of writing). Despite these concerns, Athanasius’ tone was not much worse than others in his own day, and so focusing on his theological ideas will yield a better impression of the man.

Athanasius was born in the city of Alexandria sometime in the 290s. The city was a culturally vital city for the Roman Empire, being both a major focal point for education as well as the breadbasket for much of the East. It is one of the rare cities that had intellectual leaders from paganism, Hellenistic Judaism, and Christianity—all drawn to the city’s philosophical schools and the fabled Library of Alexandria.

We know little about his education and family, so the earliest concrete evidence we have is when he entered the service of the bishop of Alexandria—a man conveniently named Alexander. Athanasius learned his theology and pastoral skills under Alexander as a deacon and eventually served as his secretary. He shadowed the bishop during the rise of the struggle against Arianism.

So as the Arian controversy arose, Athanasius still served in a support role until after the Council of Nicaea. He would later follow Alexander to the bishopric of Alexander, and much of his fame grew from these later years, as he championed orthodoxy against the ongoing efforts to support some of Arius’ conclusions. Nearly all of Athanasius’ works come from after Nicaea, and were used to clarify, defend, and encourage the orthodoxy of the Nicene Creed.