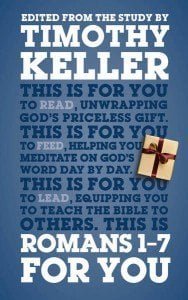 The book of Romans is a foundational book as it masterfully deals with some of the most in-depth and important matters of theological truth. Thus having a solid understanding of what the Apostle Paul is declaring in Romans is absolutely vital to understanding issues ranging from sin, to living our life as children of God, matters related to the sovereignty of God, and the often debated issues concerning who Israel is, her future, and how those who have been grafted into the root of Israel must understand what that is all about. These are the issues deftly addressed by Tim Keller in his excellent commentary called Romans 8-16 For You.

As the title of this commentary implies, this book is focused on helping lay Christians walk through what are some very difficult passages of Scripture. Keller is quite skilled at such an approach and his pastoral heart and ability to take complex theological issues and to break them down into statements one can chew on and then apply is noticeable throughout this book. I was impressed by the number of times Keller adeptly walked through a complex issue and then provided the all important element of application.

For instance, in the very first chapter, Keller discusses the issue of how we have been set free from slavery to sin. This often carries with it two sides of the coin with one side wrongly stating “Real Christians don’t struggle with sin anymore” (i.e. legalism) and the other side declaring “Real Christians are human; they sin like anyone else” (i.e. permissiveness). Both sides are quite wrong in their approach. Keller wisely notes that “our sanctification by the Holy Spirit is the cause or the ground of our justification – that it is as we fight sin and obey God that we are made right with God.” God’s grace and the Holy Spirit working in our hearts to remove the root of sin necessarily results within us a desire to serve and glorify God by being obedient to His commands found in Scripture.

One section of Keller’s commentary I was immediately drawn towards was his comments on Romans 11, the often discussed, often misunderstood, and often improperly exegeted portion of the book of Romans. There are some who wrongly asserted that God has ditched Israel to the curb. Moreover, many also wrongly understand what that term “Israel” refers. Furthermore, those who have taken the wrong path on those aforementioned issues, further stretch their exegesis by incorrectly declaring that God created the church to take the place of Israel within God’s grand salvation history plan. Nothing, of course, could be further from the truth, given the Apostle Paul clearly notes that we have been grafted into the root of the promises made to Israel. If the root were dead and no longer valid in God’s plan, there would be no point in being grafted into that which ceases to be as that would be an exercise in futility.

Keller rejects that replacement theology nonsense, clearly noting “the way that the gospel has been received by Jew and Gentile is all part of God’s sovereign plan – a plan that includes Jews coming to faith, not just non-Jews.” Keller also rightly notes that ultimately, those who are “Israel” are those whom God has called or to use a better term, the elect or the called. Paul is making the case that God’s plan is rooted in a call that is rooted in the promises made long ago to Abraham, namely that through him all the people of the earth would be blessed. Keller saliently comments, “All peoples – both the Gentiles and the Jews – have been disobedient, and yet all peoples – from the Gentiles and Jews – will find God’s mercy. Those who are obedient and who have been called by God are Israel, the people of God, both Jew and Gentile, male and female. Thus, the ecclesia noted in the New Testament is part of that greater assembly of God’s people throughout history, a people who have been granted access to the covenant promises of God made so long ago.” Keller does an excellent job walking the reader through this difficult and important matter and this particular chapter is representative of the quality exegesis Keller provides throughout his commentary.

For those wanting a commentary on Romans that is accessible and that helps them to grasp the often complicated, yet highly important theological truths found in Romans should definitely take a look at this book. It is one I highly recommend and one I know I will find myself returning to in future studies of Romans. I also recommend the previous book to this one as the two together make a great set on Romans.

This book is available for purchase from The Good Book Company by clicking here.

I received this book for free from The Good Book Company via Cross Focused Reviews for this review. I was not required to write a positive review. The opinions I have expressed are my own. I am disclosing this in accordance with the Federal Trade Commission’s 16 CFR, Part 255: “Guides Concerning the Use of Endorsements and Testimonials in Advertising.”