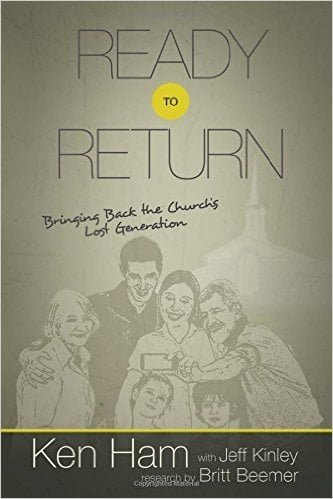 When it comes to the next generation of believers, the body of Christ has a serious problem. Many young people, especially those going off to college, do not return back to the fold meaning something leads them to stray from the faith. The statistics are startling and should be cause for alarm. In his books Already Gone and Already Comprised, Ken Ham takes an in-depth look at what is causing this departure. To a large degree, the problem resides in the severe lack of biblical truth being taught in churches today beginning with the foundational book of Genesis. With those core foundations being rejected, it is no wonder many other critical issues of the faith have come under fire with the result being this mass departure by the youth with many never returning.

In his follow-up book aptly titled Ready to Return: Bringing Back the Church’s Lost Generation, Ham saliently outlines some key strategies for correcting the issues identified in his previous two books on this subject matter. He challenges the popular approach of acquiescing to post-modern thought and cultural relevance at the expense of biblical truth and dares to suggest that in order to fix the departure problem of our youth, it might just make good sense to get back to sound biblical teaching, jettisoning the compromising positions far too many churches have taken over the years.

Now Ken Ham makes it quite clear where he stands on issues such as origins. He is, after all, head of a young earth creationist organization and thus is very passionate about that particular subject. There will be many who might question whether the book of Genesis or origins, in general, has anything really to do with the problem we are seeing with the youth in our churches departing and not returning. As evidenced in Ham’s previous books, the statistics, and interviews with those youth reveal the questioning of what can be considered as foundational biblical precepts, in particular, the truths found in Genesis was just that – the genesis for their departure. Ham reiterates the startling statistics in this book just in case there is any question as to the root of the problem.

He challenges the church to “repent of our low view of Scripture, humble ourselves, and learn the lesson God taught the Israelites in Deuteronomy 8:3.” A proper defense of the faith must stem from a high view of Scripture, and that high view must infiltrate every aspect of how we approach, understand, apply, and teach the truth of God’s Word. As Ham aptly notes, having a high view of Scripture “is the cure for our blindness and the blandness so prevalent in the Church today.”

I appreciated Ham’s picture of describing the faith as a bit like a baton race with one generation handing off things to the next. We have greatly fumbled of late the passing of the baton. Failure to properly pass on the truths of the faith diligently and correctly can and does result in future generations straying farther from the foundations of the faith. We are seeing that take place today. As Ham rightly reminds us, “we must make it a top priority to train, equip, mentor, and model an effective apologetic for this generation of young believers living in a post-modern world.” This training must start with children when they are very young, and it must continue in a consistent manner all the way through adulthood.

Ham makes a great plug for homeschooling which I also greatly appreciated. He does realize that for many families, homeschooling is just not an option. For those who send their children to a Christian school, they must still be aware of what their child is learning. Given the statistics that Ham continually presents in this book, it is clear that even Christian schools have gone down the road of compromise, particular on the issue of origins. We know public schools teach evolution, so the challenge exists for parents to combat that line of influence as well.

This is a war, one for the hearts and minds of our youth. Ham’s book is a call to action and a timely one. The longer we fail to engage in the battle, the more startling the statistics will become. All hope is not lost of course, but it is time for the people of God to return to foundational biblical truth starting from the first pages of Genesis. This is a book I highly recommend for all believers, in particular elementary, middle school, and high school pastors, parents, and anyone who regularly engages with youth, small or ready to go off to college.

I received this book for free via Cross Focused Reviews from Master Books and the opinions I have expressed are my own. I am disclosing this in accordance with the Federal Trade Commission’s 16 CFR, Part 255 : “Guides Concerning the Use of Endorsements and Testimonials in Advertising.”