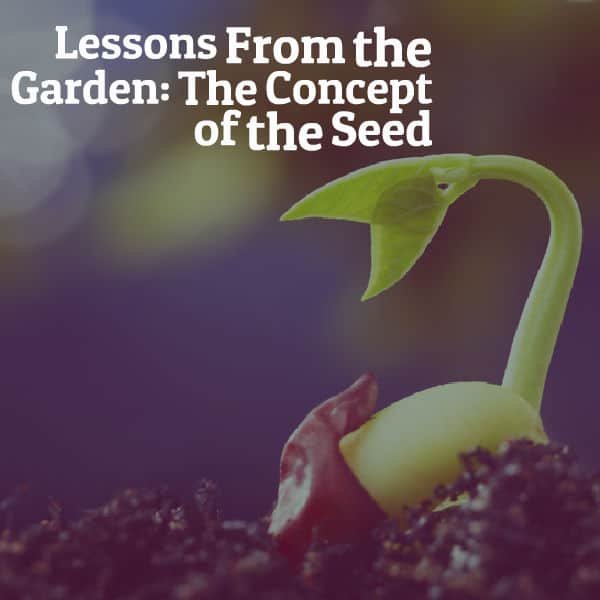 Lessons From the Garden: The Concept of the Seed

There is an interesting concept that can be observed in the formative pages of Scripture, namely that of seeds. We find God creating the vegetation with the command in Genesis 1:11 of “Let the earth bring forth grass, the herb that yields seed, and the fruit tree that yields fruit according to its kind, whose seed is in itself, on the earth.” We also find God creating the sea creatures, the birds of the air, and the animals with the command they be fruitful and multiply – a command that refers to seeds and reproduction. Most magnificently when it comes to God’s creative act is the creation of man. The command to be fruitful and multiply is also noted, referencing yet again this reality of reproduction.

If we ponder the idea of the seed for one moment, we have to first begin with some basic facts. Look at a plant seed, say for instance a nut that falls from a tree. Given the right conditions, soil, and watering, that nut contains a seed from which will grow a tree. This means that everything that makes that tree a tree can be found in that nut and its seed. The same is true when it comes to man. The seed if you will is found in what is provided by the man and the woman which combined, forms all that is required to produce a human being.

Another important element inherent in this concept is the aspect of growth. A seed is planted, in the ground or in the womb of a woman and that seed then experiences a period of growth wherein that seed grows into maturity after its own kind. For instance, a seed of the aforementioned nut tree will grow into the kind of tree from which it came. The seed of the man and woman combine to produce a human being. In both instances, they are a reflection if you will, an image of that from which they came. So the concept is a seed that reproduces and grows into a mature entity.

This is the pattern God established at creation. It is a pattern we find all around us in nature. Furthermore, it is a pattern we find not just in the natural realm, but also in the spiritual realm as well, in particular when it comes to our relationship with God. We typically think of being made in the image of God as something related to matters of intellect or some other matter of spirituality. While true, perhaps a forgotten element is that in order to be an imager of God, the movement towards maturity has to take place, the growth of the seed.

We can describe this growth as the progression from merely being to becoming. If we think about this on a practical level in more everyday parlance, we often call the teenage years as the movement from being a child to becoming an adult. It is a transformative time in everyone’s life when they leave their childish ways behind and move forward into an increasing place of maturity. If one maintains childish mannerisms, their growth can be stunted and that movement towards adulthood and maturity might not become reality.

The same is true in our relationship with God. He created Adam and Eve, placed them in the Garden and gave them the command to be fruitful and multiply. Also given was the command to be obedient. The expectation was a growth towards maturity with further reproduction of progeny who also would be obedient to God’s commands as well as the God given commands within the familial structure provided by Adam and Eve with their children reproducing and their children reproducing to populate the earth in a place of perfection. Of course with the entrance of sin, the reproductive movement towards spiritual maturity became a bit marred.

Nevertheless, moving from a state of being to a state of becoming is an important and necessary part of being a God imager, a reflection of who He is as well as the need to move towards maturity. One cannot just be a seed that is planted and sprouts a little bud with that sprout being all that takes place in the life of that seed. We find in Scripture the repeated command to move forward into maturity. We even this construct of maturity in matters of theology within Scripture. The seeds of the message of the gospel and redemption are found in Genesis. Move forward through the pages of God’s Word and you can see the growth of that message take place until we find its maturity in the return of the bridegroom Jesus for His bride and the final redemption and restoration of all things, that return to the Garden we have been focused on of late. With that said, as these matters of theology take place in Scripture, they do not and cannot contradict the DNA if you will that was inherent within the seed planted in Genesis. If that takes place, what one has is a mutation and not the result that should have taken place had the seed been allowed to grow properly after its own kind, in this case from a properly rooted perspective of Scripture that grows (to use this planting metaphor) from those formative pages of Scripture. Perhaps a good way to look at this is the seed sprouts roots from which the branches and fruit are produced.

This means that in order for us to grow into mature imagers of God and to reproduce as God commanded spiritually speaking and in relationship with Him, we have to grow our roots firmly in the foundation of His Word, allowing those roots to take shape in a consistent and purposeful manner. Roots in the physical world do not dig deep overnight. They take time to work their way into the soil. It takes a great deal of watering for those roots to take shape in order to allow the trunk of the tree to rise, for the branches to extend, and for the fruit (i.e. actual fruit or leaves) to bud and then grow).

The same is true in our spiritual lives and in our relationship with God if we are to be consistent with the pattern and principle God has established. The seed is planted and it takes time and watering for our roots to grow. Furthermore, our roots must grow in a consistent and purposeful manner. If our roots merely grow along the surface, the tree has no depth and it will either wither away or be blown down by the passing storms of life. Trees with strong roots are able to withstand what comes their way and to then grow into maturity, bearing fruit. If we have no depth in God’s Word and instead chase after every whim of doctrine, not caring to establish the roots of sound theology from the first pages of Scripture, spiritual growth, and the movement towards maturity in our relationship with God and others will be stunted, if it takes place at all.

Far too often we find ourselves chasing around Scripture for answers to this or that, not realizing that we have not first established solid roots. We have often not taken the time needed to dig deep and to allow the seed to take root before trying to shoot up into the proverbial sky. It is no wonder then that the fruit that is produced isn’t healthy. It had no proper root and was not watered appropriately from all of Scripture, allowing the seed to take root, to sprout, to spread, and then to grow into maturity, all coming from the seed. It is almost as if the tree is trying to grow without a seed. Such a thing is impossible in nature and it is impossible in the spiritual realm as well.

The concept and pattern of the seed found in the early chapters of Genesis is far more than plants reproducing after their kind and humans making babies. Those are certainly part of the picture God is painting for us. With that said, He is also providing to us the important reality of spiritual seed. He expects us to grow in maturity given growth is an inherent part of natural reality. To grow we must have roots. Those roots must be found in the front of the book and established in such a way that we recognize that from the seed, comes the mature tree. Growing in maturity in the faith necessitates allowing that seed to grow with the Word of God taking firm root in our lives. As we embrace what God has to tell us, the result is that movement towards maturity through the work of the Holy Spirit watering that seed in our hearts.