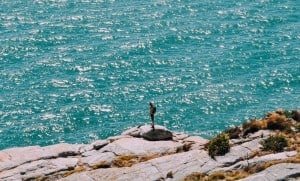 Sometimes we need to plunge our minds into the ocean of God’s sovereignty. We need to feel the weight of it, like deep and heavy water pressing in against every pore, the deeper we go. A billion rivers of providence pour into this ocean. And God himself gathers up all his countless deeds — from eternity to eternity — and pours them into the currents of his infallible revelation. He speaks, and explains, and promises, and makes his awesome, sovereign providence the place we feel most reverent, most secure, most free.

Sometimes we need to be reminded by God himself that there are no limits to his rule. We need to hear from him that he is sovereign over the whole world, and everything that happens in it. We need his own reminder that he is never helpless, never frustrated, never at a loss. We need his assurance that he reigns over ISIS, terrorism, Syria, Russia, China, India, Nigeria, France, Myanmar, Saudi Arabia, and the United States of America — every nation, every people, every language, every tribe, every chief, president, king, premier, prime minister, politician, great or small.

Sometimes we need to hear specific statements from God himself about his own authority. We need God’s own words. It is the very words of God that have unusual power to settle our nerves, and make us stable, wise, and courageous.

On the one hand hearing the voice of God is like a frightened child who hears the voice downstairs, and realizes that daddy’s home. Whatever those other sounds were, it’s OK. Daddy’s home.

On the other hand it feels like the seasoned troops, dug in at the front line of battle, and about to be overrun by the enemy. But then they get word that a thousand impenetrable tanks are rushing to their aid. They are only one mile away. You will be saved and the enemy will not stand.

Vague generalizations about the power of God do not have the same effect as the very voice of God telling us specifically how strong he is, how pervasive his power, how universal his authority, how unlimited his sovereignty. And that our times are in his hands.

And as we listen, let us praise him. There is no other fitting way to listen to God’s exaltation of God. This is what happens to the human soul when we plunge into the ocean of God’s sovereignty.
We praise you, O God, that all authority in the universe belongs to you.

“There is no authority except from me, and those that exist have been instituted by me.” (Romans 13:1)

“You, Pilate, would have no authority over my Son at all unless it had been given you from me.” (John 19:11)

Men and Women in the Church by Kevin DeYoung

One of the most contested issues in the church in recent days concerns the role of men and women in the church. The chief question among many people is this: “Can a woman preach on a Sunday morning to a congregation that consists of both men and women?” People also...

Embodied: Living as Whole People in a Fractured World by Gregg R. Allison

Embodied: Living as Whole People in a Fractured World by Gregg R. Allison addresses a crucial matter that impacts everyone. While every systematic theology addresses the issue of embodiment, few tackle this subject with the skill and precision that Dr. Allison does...

The New Creation and the Storyline of Scripture – Frank Thielman (2021)

The New Creation and the Storyline of Scripture by Frank Thielman is the most recent installment in Crossway’s Short Studies in Biblical Theology. The goal of this series, according to the editors, is “to magnify the Savior and build up his church – magnifying the...

Reading has fallen on hard times. Technology and all things visual have led to a steady decline of the written page. Leland Ryken and Glenda Faye Mathes have something to say about this problem in their book, Recovering the Lost Art of Reading. Reading is a Lost Art...

The church is at the very center of God’s redemptive purposes. Gregg Allison is quick to articulate this great reality in The Church: An Introduction. Dr. Allison’s work is the newest installment in Crossway’s Short Studies in Systematic Theology series, one that has...

Review of Providence by John Piper

Introduction John Piper has been a faithful pastor and author for several decades and has greatly influenced the Reformed Evangelical community. In his most recent book, Providence, Piper unpacks one of the central themes of his life and ministry, namely, the...