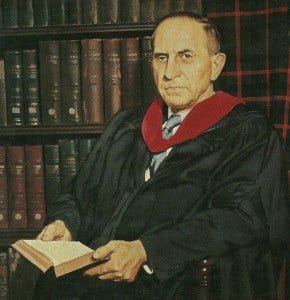 A perusal of the statements of the Westminster Confession of Faith and of the Larger and Shorter Catechisms bearing upon the fourth commandment will show that the position taken in these Standards is that of the universal and perpetual obligation of the Sabbath and that this obligation rests upon divine commandment. The commandment to which reference is made is, of course, what we know as the fourth in the decalogue. These Standards, however, imply that the Sabbath law, expressed in the fourth commandment, was not first instituted when the ten commandments were promulgated to the children of Israel at Sinai. We know that the Sabbath institution goes back to creation; we know that there is explicit allusion to the observance of the Sabbath and of divine commandment bearing upon that observance prior to Sinai. Of such facts these Standards are not forgetful, and so the language is carefully framed to include and guard these facts. Nevertheless, the law that had been instituted at creation did receive at Sinai formal enunciation and promulgation. It was included in the ten words given to Moses and written with the finger of God upon the two tables of stone.

At Sinai, then, the Sabbath law was set forth with fullness and explicitness and we do not have evidence that it had before then received similarly full and formal pronouncement. So, for our knowledge of what the content and import of the Sabbath institutions are, we are largely dependent upon the fourth commandment. What is this law or institution?

The Sanctity of the Day

First, and most elementally and centrally, it is that one day in seven is distinguished from the other six. That day is to be sanctified, and at the heart of the word sanctify is the idea of distinction and separation. This one day is set off, it is placed in a distinct category. This import of the word cannot be evaded and it is to be very carefully marked, for on it depends the whole notion of what we may and must call the sanctity of the Sabbath.

It is not, however, the bare notion of distinction or separation that is expressed in the commandment. The command to sanctify occurs in a context. “Six days shalt thou labour, and do all thy work: but the seventh day is the sabbath of the Lord thy God.” And it is not only in the context of the remainder of the commandment, but also in the context of the other commandments. “Thou shall have no other gods before me.” “I the Lord thy God am a jealous God.” “Thou shall not take the name of the Lord thy God in vain.” It is separation, therefore, to God, to the specific purpose of contemplation upon Him and specific occupation with His work in contrast with their own work. In this kind of distinction or sanctity the meaning of the fourth commandment resides. Abolish it, and the essence of the commandment is destroyed. There is no purpose in contending for the moral obligation of the commandment unless this sanctity is recognized and preserved, for it is the core around which all else is formed and without which all else disintegrates. Just as there is an ineradicable distinction between the six days of creation and the day of rest by which they were followed, so it is here. And it is precisely with this reminder that the commandment itself ends, “For in six days the Lord made heaven and earth, the sea, and all that in them is, and rested the seventh day: wherefore the Lord blessed the sabbath day, and hallowed it.”

Israel truly was a holy people; they were separated unto God Jehovah. It might, then, be supposed that the sanctification of one day in seven was inconsistent with the totality of their devotion to God. Yet it is an inescapable fact that this kingdom of priests and holy nation was in the most direct way commanded to separate one day from the other six for a specific purpose. And unless our conception of devotion to God, and of time as it is related to Him, can embrace and appreciate this notion, together with the divine wisdom embodied in it, we can have no understanding of the fourth commandment.