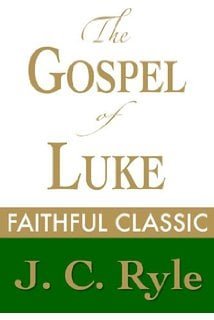 The Gospel of Luke, which we now begin, contains many precious things which are not recorded in the other three Gospels. Such, for instance, are the histories of Zachariah and Elizabeth, the angel’s announcement to the Virgin Mary–and, to speak generally, the whole contents of the first two chapters. Such, again, are the narratives of the conversion of Zaccheus and of the penitent thief–the walk to Emmaus, and the famous parables of the Pharisee and Tax-collector, the rich man and Lazarus, and the Prodigal Son. These are portions of Scripture for which every well-instructed Christian feels peculiarly thankful. And for these we are indebted to the Gospel of Luke.

The short preface which we have now read is a peculiar feature of Luke’s Gospel. But we shall find, on examination, that it is full of most useful instruction.

In the first place, Luke gives us a short, but valuable, sketch of the nature of a Gospel.He calls it, “a declaration of those things which are most surely believed among us.” It is a narrative of facts about Jesus Christ.

Christianity is a religion built upon facts. Let us never lose sight of this. It came before mankind at first in this shape. The first preachers did not go up and down the world, proclaiming an elaborate, artificial system of abstruse doctrines and deep principles. They made it their first business to tell men great plain facts. They went about telling a sin-laden world, that the Son of God had come down to earth, and lived for us, and died for us, and risen again. The Gospel, at its first publication, was far more simple than many make it now. It was neither more nor less than the history of Christ.

Let us aim at greater simplicity in our own personal religion. Let Christ and His Person be the sun of our system, and let the main desire of our souls be to live the life of faith in Him, and daily know Him better. This was Paul’s Christianity. “To me to live is Christ.” (Philipp. 1:21.)

In the second place, Luke draws a beautiful picture of the true position of the apostles in the early church.He calls them, “eye-witnesses and servants of the word.”

There is an instructive humility in this expression. There is an utter absence of that man-exalting tone which has so often crept into the Church. Luke gives the apostles no flattering titles. He affords not the slightest excuse to those who speak of them with idolatrous veneration, because of their office and nearness to our Lord.

He describes them as “eye-witnesses.” They told men what they had seen with their own eyes, and heard with their own ears. (1 John 1:1.) He describes them as “servants of the word.” They were servants of the word of the Gospel. They were men who counted it their highest privilege to carry about, as messengers, the tidings of God’s love to a sinful world, and to tell the story of the cross.

Well would it have been for the Church and the world, if Christian ministers had never laid claim to higher dignity and honor than the apostles claimed for themselves. It is a mournful fact, that ordained men have constantly exalted themselves and their office to a most unscriptural position. It is a no less mournful fact, that people have constantly helped forward the evil, by a lazy acceptance of the demands of priest-craft, and by contenting themselves with a mere vicarious religion. There have been faults on both sides. Let us remember this, and be on our guard.