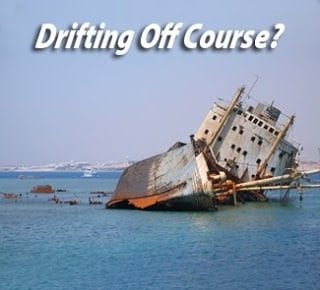 “Therefore we must pay much closer attention to what we have heard, lest we drift away from it.” Hebrews 2:1

The writer of Hebrews provides four warnings concerning “drifting away,” or leaving the faith, throughout the book. Christians are warned about the reality of becoming a “Demas” (2 Tim. 4:10, “For Demas hath forsaken me, having loved this present world, and is departed…”), someone who has left the faith. The Apostle John, regarding believers who left the faith, states this:

“They went out from us, but they were not of us; for if they had been of us, they would have continued with us. But they went out, that it might become plain that they all are not of us” (1 John 2:19).

Therefore, the admonitions which are provided for us to be aware of drifting away are sincere. In Hebrews, the writer utilizes two sailing terms (in the Greek) in the above verse (2:1). The first word is translated into English as “drift away.” This Greek word is pararreō, which literally has the connotation of a ship drifting from its mooring. Richard Phillips states, “One of the key ideas here is that this drifting away is something that happens largely unnoticed.” [1] The second Greek term is prosechō, which is translated as an imperative verb, to beware. Phillips states, “…it was used to denote holding to a course or securing an anchor.” [2] Later, the writer of Hebrews will conclude, “we who have fled for refuge might have strong encouragement to hold fast to the hope set before us. We have this as a sure and steadfast anchor of the soul” (6:18b-19).

This reminds me of a day at the beach years ago. A woman was on a raft in the Atlantic Ocean. As she tanned, relaxing on vacation, and most likely nodded off, she had no idea that her raft had drifted beyond the breakers. The lifeguards were frantically blowing their whistles, but to no avail, the woman drifted further and further to sea, not being able to hear due to the Ocean’s soothing roar. The lifeguards quickly called on the Coast Guard, who dispatched a rescue helicopter, which was immediately on the scene. However, the woman was still oblivious to her demise and situation, even as many people yelled from the shore, along with constant lifeguard whistles in warning. As the Coast Guard helicopter hovered over her, causing a downdraft of water spray, a voice came over the helicopter’s loud speaker, startling the woman. She quickly shot up on the raft, but was close to ¾ to a mile off of the shore. The good news is, The Coast Guard lowered a rope and pulled her to a vacant area safely down the beach.

My account reminds me of the famous scientist, we all know, who was at one time very orthodox in his faith. He attended Seminary and received his degree and almost set out for a life as a pastor. In his autobiography, he writes:

“Whilst on board the Beagle I was quite orthodox, and I remember being heartily laughed at…for quoting the Bible as an unanswerable authority on some point of morality…But I had gradually come by this time, to see that the Old Testament was no more to be trusted than the sacred books of the Hindoos.” [3] Sadly, Charles Darwin drifted slowly away from the faith. It is obvious to see that the rope holding him to the mooring of his faith was broken free, and he unnoticingly, sailed into uncharted waters. Although Darwin had heard whistles and yells of warning, he kept on drifting, to the point of no return.

Therefore, heed the message today about your faith in Christ, are you anchored in Him? Make sure that your faith is tied securely to its mooring. Pay attention to those in the faith around you and take heed of their warnings. If you are drifting in the ocean of this world, it is not too late, wake up and look to the seashore. God always sends His Coast Guard to make sure that you hear His voice.